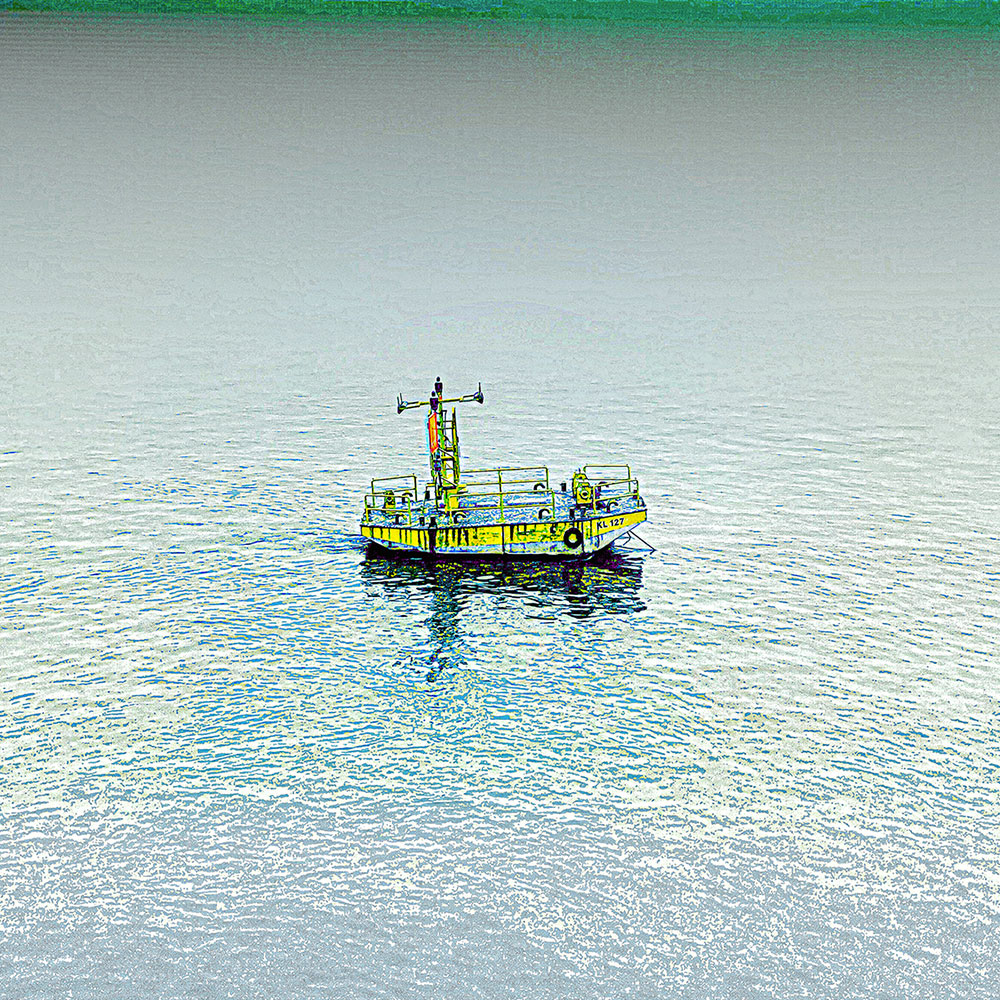 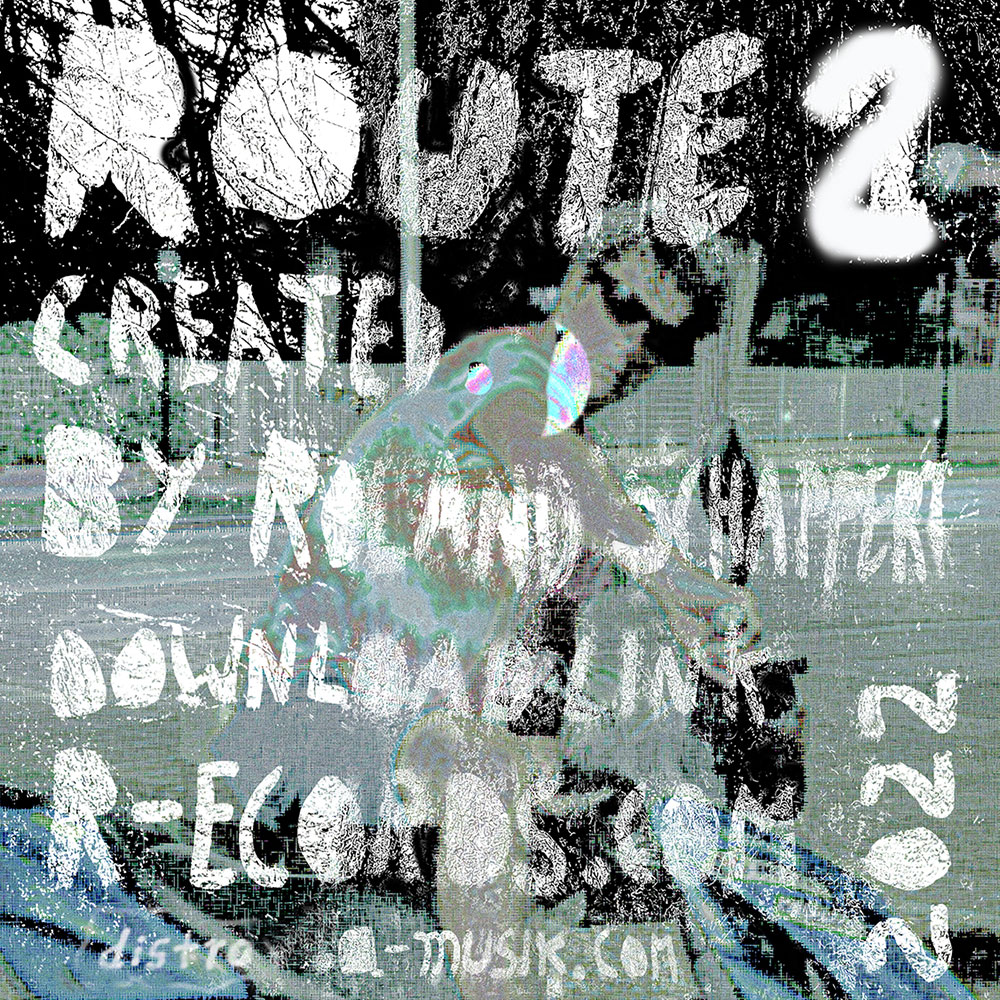 The double LP ROUTE 2 consistently follows the sound worlds of the LP ROUTE 1, also released in 2022 on r-ecords.com. In doing so, Roland Schappert transfers ten new pieces of his special sound generation with often surprising twists into contexts that are only remotely reminiscent of familiar analog instruments or digital synthesizers. Short melody fragments, pointed tone sequences and rhythmic phrases in varied loops or unique are organically interwoven with each other.

With sparing means and careful dramaturgy, Schappert evokes different moods and counteracts their clarity with interpolations of abstract sensual sounds and their phenomena of dissolution. The tempos are often accelerating. But before intoxicating states set in, they are slowed down. Poetry, spoken aphorisms, is largely dispensed with this time. Only once, on side B in I LOVE YOU, do we hear Schappert's own, but heavily distorted voice. On side C, the spoken word piece DICH , which lasts less than a minute, evaporates between two longer rhythmic pieces like a small postscript. A current example of the fact that his digitally designed sound emotionality on the whole does not necessarily contain the expression of the overly sentimental. With this and all the other instrumental pieces Roland Schappert shakes up the listening habits of the listeners. He repeatedly questions common notions of harmony, but does not deny them; instead, in the electronic context, he simulates a fragile-seeming, in the end almost closed whole, without stimulating an overly trusting uniformity. The euphony that emerges again and again as a conciliatory commonality need not be unbroken; it can be thwarted by disparate structures, but it shimmers through.

Generally, rhythms lend a more regular shape to unformed sound matter above them. Rhythm brings particles into more orderly motion - it is the powerfully driving thing compared to the tones, tone sequences and chords of a melo. The close interweaving of both musical elements gives Roland Schappert's compositions their own structure, warmth, self-understanding and conciseness. In doing so, the musician works with the complete interconnection and intermixing of sound production. The carefully devised instrumentation does not separate rhythm and melos. Roland Schappert calls this "organic digitality" - indeed an unusual vocabulary, but one that seems to fit, especially since it refers to both the electroacoustic means and their effect. In the meantime, he has created an idiosyncratic musical structure and, along the way, an independent-sounding sound world that scratches at the edges of Western music history and is permeable with fluid transitions to contemporary club aesthetics and the composing avant-garde - with subtle allusions to yesterday as well as today.

In addition, he carefully experiments with his own field recordings and speech-technically modeled expressive possibilities. ROUTE 2 is based on an intensive process of creation, which is configured with the sound generation methods of wavetable and granular synthesis, among others. Physical modeling, another process, is also repeatedly used in Schappert's sound design.

All pieces were created November 2021 to April 2022. The album is even more stringent than the LP ROUTE 1, at the same time more demanding, with fewer changes, spirited and yet in many places remained picturesquely pictorial: Introspection, irrational? Reference points: A pinch of musique anecdotique at the end of the first piece entitled DARWIN and following it in DROHNT, which Luc Ferrari couldn't have done better. And the fulminant driving, almost march-like beat on FÄLLST MIR LEICHT, which brings back memories of 80s/90s systematics in the EBM (Electronic Body Music) environment. In addition, again some almost baroque keyboard sequences, taking up Schappert's idea of melos - as a form- and sound-dependent connection of specific tone sequences and rhythmic structures. Finally, the very last track on ROUTE 2 gets charmingly damp in the truest sense of the word: CAMPARI-SEKT is a true cocktail mix of sounds consisting exclusively of a swirl of ice pieces in a glass - both shaken electromagnetically and stirred accordingly. Organic digitality in the guise of a refreshingly cool minimalism.

Bell-like sounds drip, beat sequences of notes before them, and unfold a finely chiseled microcosmic ballet. At the end, an evolutionary process unfolds and a portal opens, taking us to the echoing sounds of a bird hall, followed shortly by a tranquil ocean atmosphere. Nature is reclaiming space. Or will this prove to be a deceptive simulation in the end?

Drone threatens. Alarm sirens wail. Storm is coming. Rain whips. Children panic. Escape. Or are they just playing? Is there a cruise missile approaching? Is an alien invasion imminent? No, it’s just a drone sending out signals. It only threatens. A sci-fi scenario of a cheap B-movie production is beamed into the interstellar now. This doesn’t come across as cheap – you never actually heard the sound of an offended saucer.

I love you, ich

No dance that stands still. Slowly, like an endless cloud. Full of interruptions, radio holes on the trail. Even a short sprint does not lead to a goal in front of your eyes – this is how you get to any place steadily in unison: Nothing more or less… I love you too.

I love you, Coda

A brief recasting and acceleration of I love you, ich, summarized in a new phonetic order. Individual broken letters form an aesthetic sound structure – electronic applications get into the uncoordinated. An artistic understanding distantly reminiscent of the history of sound poetry in the guise of rhythmic structures.

There unknown – similar to a disc – creaking with melodic continuous fire pushes itself towards a deep bass layer. Airily equipped, it delights in agonizing dryness of spartan tone sequences. Turns everything and does not deviate from the path.

A stomper for the dark disco. Direct. Dynamic. Full of energy. Mechanical rhythms are mercilessly driven forward. In their echo chambers, a virtual electronic world gambles away its liberation through an unexpected synth interruption that is robotically displaced. Marching would not be an option. To let off steam on the dance floor, to really puke your soul out, that is. That’s an easy way for you to fall.

Here, only letters and words speak for one minute. Ich – ich – ich – Dich – ich liebe Dich – ich – ich – Dich. Sounding and interconnection of voice and body. With a nervous mechanics, the phonemes puff, hiss, and overlap multiple times. They are modulated, serially systematized – until the essence of each expression appears dissolved.

The panorama of a southern Andalusian city as a dazzling fresco. But without any Spanish clichés. Without tourist folklore. Sonically illuminated and interlaced. Thus, a feeling is reflected to which one might expose oneself in this place, when images detune the sounds. Thoughtfully, concentrated, almost procession-like, a melodic fragment comes together. With fluctuations at the margin. Day bright and night black. The motif is constantly repeated, changing keys, wandering through scales. Harmonies start to falter. In the process, they seem to dissolve incessantly without the piece losing substance. The instrument remains unrecognized. An unknown stringed instrument?

In glistening light, the world dream of a coastal resort shimmers in the heat. Full of absorbent cotton and pithy edges, it clicks and clanks between two winds. In the thick oil flirt cold-pressed olives. Broken open, they float away.

A few ice cubes in the glass. Before they melt, they are shaken. They rotate. Clink. Then a pan. The sound takes on a life of its own and becomes blurred. Transfers into rhythms. Loud life of its own. The cubes are no longer identifiable as such, they are filtered and metamorphosed in several shades. An electronic decomposition process seems to be inexorably underway. Rhythms circulate, catching themselves and the listeners. They are constantly changing their style. Not forever. At the end, the mass, which has become amorphous, is unveiled and diverts onto the still clinking ice. No time has passed. 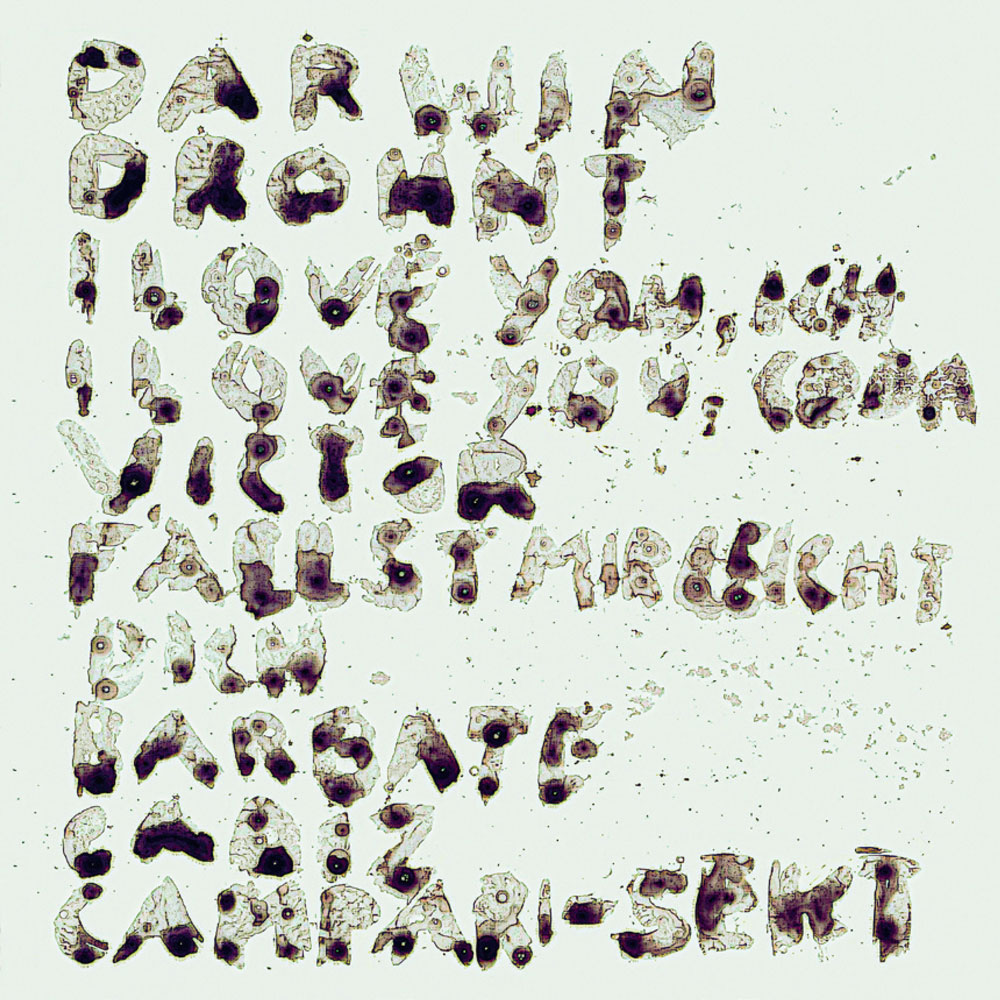 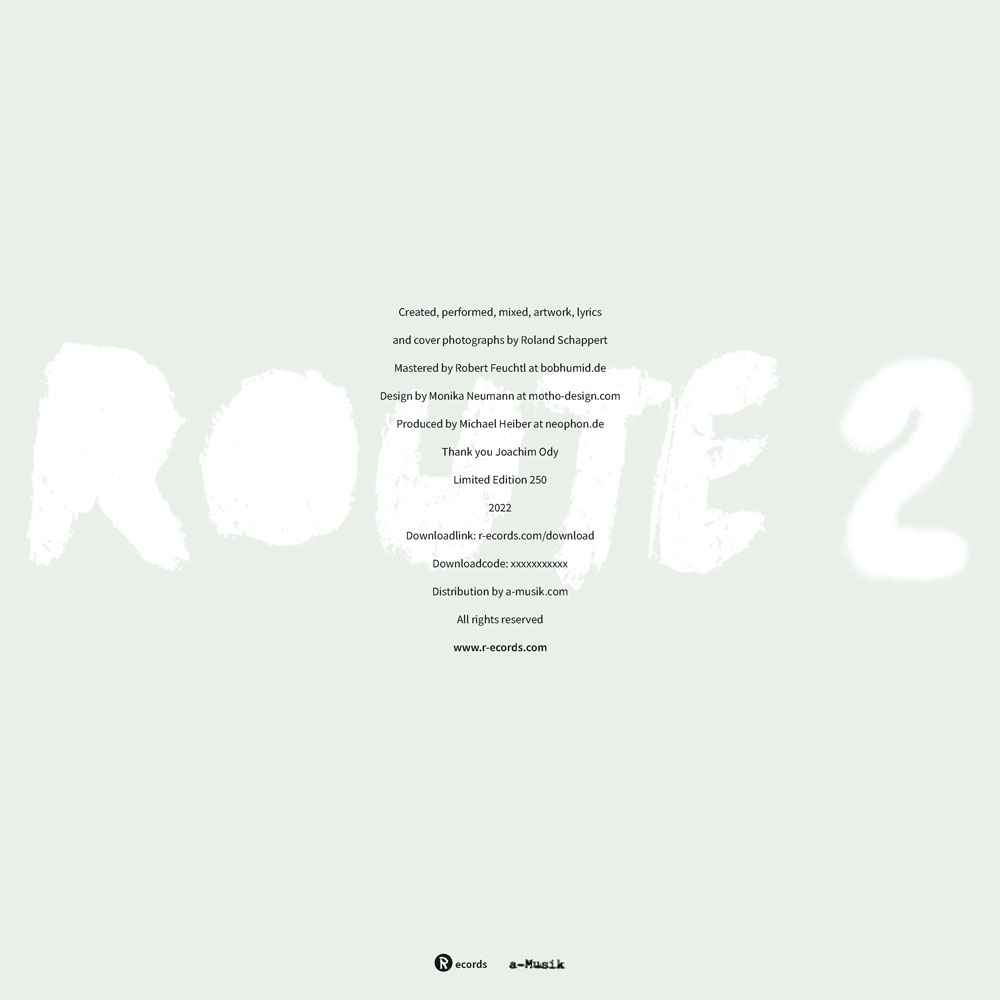